Jesse Grupper’s transition to working from home, in the pandemic’s early days, was easier than one would expect given his profession. Grupper, E19, had spent much of 2019 traveling the world as a professional climber. Fortunately, more than a decade earlier, he and his father had built a climbing wall in the family’s Montclair, New Jersey, basement.

With travel halted and local gyms closed, Grupper climbed on his childhood wall for hours a day. He varied the routes by moving the plastic molded holds that are screwed to the wall into new arrangements and strapped bags of rice to his body to increase the challenge. He also began to question his singular focus on the sport.

All that world travel was a luxury, he realized. “Just climbing for a year—it felt really rewarding, and I feel very privileged to have had that opportunity,” says Grupper, who started climbing at 6 years old. “But the reason I chose engineering was to help people.” So in July 2020, he moved back to Boston and started a full-time job in a Harvard lab.

All of that made his recent victory in the YETI National Climbing Championships all the more stunning. 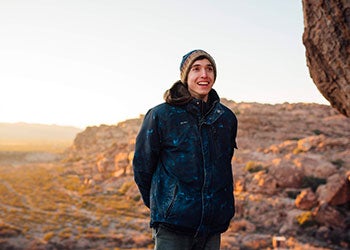 Climbers use a term, “beta,” that sums up much of what Grupper loves about the sport. Beta refers to the information that climbers commonly share with each other before attempting a route. Even at the highest levels of the sport, competitors compare notes that could help a rival beat them. Beta might also explain some of the appeal of Grupper’s other passion. Engineering is both competitive and reliant on information sharing; researchers learn from each other’s experiments and build on the knowledge gained.

As a research fellow at Harvard University’s John A. Paulson School of Engineering and Applied Sciences, Grupper works with a team developing exoskeleton devices for people who have suffered strokes. These soft robotic gadgets assist people with their daily activities. One of his projects is a glove that allows patients to perform stretching and rehabilitation exercises at home; another, a device for the ankle, helps people take longer walks.

To balance career and climbing requires a rigorous routine. Grupper typically works 9 to 6 at the lab, then heads home to change before spending two to three hours climbing, stretching, and working out at a gym. Then it’s back home for a late dinner and bed before repeating it all the next day.

Despite the pandemic, competitive climbing is booming. The sport made its Olympic debut in 2021, and that visibility has attracted more participants and sponsors—and made Grupper wonder if he could catch up after an extended hiatus.

Still, when he returned to competition in August 2021 after a 22-month break, the longest he’d taken since he laced up his first pair of climbing shoes, he knew he was in good shape. In early November, on his first attempt, he completed one of his toughest outdoor routes ever, “Livin’ Astro” in Rumney, New Hampshire. The climb is rated 5.14c on a scale where 5.15 is considered nearly impossible. Two weeks later, Grupper was the surprise national champion, defeating, among others, both members of the U.S. Olympic team.

He’s thinking about how to build on that success, perhaps even by chasing a spot on the 2024 Olympic team. But he doesn’t plan to put his engineering career aside to pursue his climbing goals. “I want to excel in both,” he says. “It would be hard for me to just climb and not feel like I’m getting fulfillment from other places as well.”

He also wants to help others benefit from the sport that has given him so much. He’s a member of the board of directors at USA Climbing, the sport’s national governing body, where he co-founded a diversity, equity, and inclusion committee.

“My personal goal is to make climbing more inclusive,” he says. “It comes back to the idea of beta—when you have people with different perspectives all trying to figure out a problem together, it works out better.”

Marc Chalufour is a freelance writer. Send comments to now@tufts.edu.