In December, a group of Vietnamese Americans welcomed a displaced Afghan family into the Seattle community, providing a furnished home, well-stocked refrigerator, and ongoing support. The Vietnamese Americans, who were once refugees themselves, were among the first volunteers for the Sponsor Circle Program for Afghan Refugees, a new system to help resettle the tens of thousands of Afghan evacuees living on military bases in the United States.

The nine resettlement agencies that work with federal funding to resettle refugees in the U.S. “don’t have the capacity to help all the Afghan evacuees on bases,” says Sasha Chanoff, F04, N04. “There was an urgency, and is an urgency, to get people off bases as quickly as possible.” 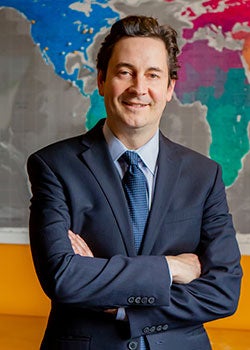 Even after the Afghan evacuees are resettled, the sponsor circles program may play a key role in resettling displaced people from other parts of the world in the United States, says Sasha Chanoff. Photo: Courtesy of Sasha Chanoff
Asking willing citizens to help welcome the newcomers makes sense to Chanoff, the founder and CEO of RefugePoint, a Cambridge, Massachusetts–based nonprofit dedicated to developing lasting solutions for the world’s most vulnerable refugees. His organization joined the Sponsor Circle Program in October, helping to shape the program that was launched by the State Department and partners in the Community Sponsorship Hub.

About 75,000 displaced Afghans have been temporarily housed on American military bases since the U.S. withdrew from Afghanistan last August, ending its 20-year involvement there. By late January, about 10,000 Afghans remained on bases awaiting permanent resettlement.

The Sponsor Circle Program, which is private, pairs displaced Afghans with a group, or circle, of at least five volunteers who have agreed to host them for at least 90 days, helping with all the basics of integrating into life in a new country at no cost to the refugee. “The sponsor circles need to put together a resettlement plan of action before they’re approved to move forward,” Chanoff says. He expects at least 150 circles to welcome Afghan evacuees into their communities by mid-February, and says “it might start expanding very significantly after that.”

RefugePoint staff play a unique role in the program, including working on military bases to identify Afghans to participate in the Sponsor Circle Program, explaining how it works and helping those who are interested to sign up. RefugePoint also connects sponsor circles with Afghans, and it is raising funds: While the State Department initiated the Sponsor Circle Program, the agency is not financing it.

In Seattle, the Vietnamese Americans who formed a sponsor circle asked local Afghan community members if they knew any Afghan refugees on bases in the U.S. It turned out, someone did—and the Sponsor Circle Program relocated that person and their family to Seattle, under its care. To do so, the group was vetted for security purposes and trained in resettlement best practices. Its members agreed to provide basics such as housing and food, and raised $2,275 for each displaced Afghan they sponsored.

The program’s leaders are recruiting more sponsor circles and considering how the effort may evolve. Even after the Afghan evacuees are resettled, Chanoff says, it may play a key role in resettling displaced people from other parts of the world in the United States, to increase the country’s ability to help those who can’t go home.

In addition to RefugePoint, the coalition partners in the Sponsor Circle Program for Afghan Refugees include Airbnb.org, the Community Sponsorship Hub, the International Rescue Committee, Integrated Refugee & Immigration Services, and Welcome.US.

Heather Beasley Doyle is a freelance writer based in Arlington, Massachusetts. Send comments to now@tufts.edu.

In the Chaotic Evacuation of Afghanistan, the Tufts Network Arranged a Midnight Convoy

With Afghan Schoolgirls in Peril, These Volunteers Rushed to Help