Lessons Learned from a Civic Semester in the Southwest

After beginning their college careers with the experiential learning program through Tisch College of Civic Life, first-year students reflect on their Civic Semester experiences

A group of first-year college students living, studying, and traveling together through the U.S. Southwest may sound like the setting of a reality show. But for the nine students enrolled in the Tufts Civic Semester, the experience was eye-opening and enlightening.

The Civic Semester program through the Jonathan M. Tisch College of Civic Life is an innovative first-semester program that combines academic and experiential learning with a focus on community engagement and social and environmental justice.

Last fall, the second-ever cohort of Civic Semester students arrived in northern New Mexico, ready to begin their college careers with a three-month, multi-state excursion that was guaranteed to shake them out of their comfort zones. They completed Tufts coursework virtually that was aligned with their community work, keeping them on track with their peers on the Medford campus.

“Anthropology of the Environment paired unfathomably well with the program goals and the experiences taking place on the ground,” said Ben Chisam, A25. “We were able to bring a whole new layer of understanding to the class because of the things we'd been doing. For example, being able to discuss Los Alamos in class after visiting it ourselves.”

Four members of the group—Chisam, Lily Feng, Angelia Shi, and Lois Waterman—shared with Tufts Now some of the lessons they learned during their Civic Semester.

Experiential learning is unparalleled. “I learned more about Indigenous sovereignty, environmental justice, and border issues than I had in my entire life,” said Waterman, who is originally from Yarmouth, Maine. “And we were learning from people who were actually affected by those issues, who spoke from personal experience.”

The people who shared their personal stories showed vulnerability, which made the experience even more memorable for students. “We were welcomed into places that were sacred to Indigenous people, and there was a certain amount of vulnerability that we always had to remember, but that’s what made the learning experience so fruitful,” said Waterman. 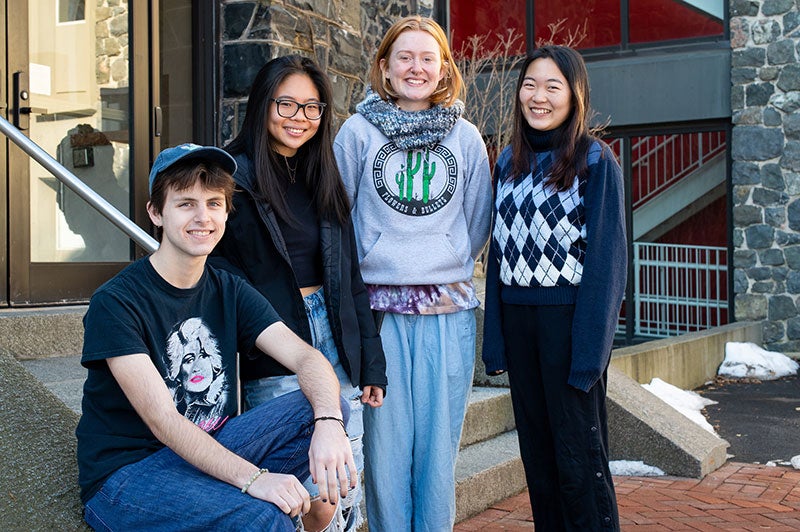 Social justice themes are often interconnected. “We met and interacted with a lot of Indigenous people,” said Chisam, who grew up in Georgia. The students heard from Indigenous activists who were devoted to preserving the water supply and increasing access to traditional and healthy food, which relates to not only Indigenous sovereignty but also to environmental protection. The activists cited nuclear testing and fracking as causes of environmental damage and health problems in local Indigenous communities.

The issues at the border are huge. The students spent a week in El Paso, Texas, focused on immigration and other issues that arise at the border between the U.S. and Mexico. They spent time with Casa Carmelita, a shelter and resource center focused on fighting injustice on both sides of the border, and humanitarian aid organization No More Deaths.

It was a heavy topic that left them physically and emotionally exhausted, as Feng described in this poignant entry posted on their group blog:

While sitting in the extreme, desolating heat of the Sonoran Desert, our cohort was hit by the immensity and gravity of such a complex issue like the Border Wall, the economic, political, historic, and ethical crises that it encompasses, and the inhumanity and violence that those who travel between must endure.

After our discussion, we went on a water drop, where volunteers hike along trails and leave water, food, blankets, and other supplies for those traveling through the desert. Heavy in our backpacks were an assortment of beans, gallons of water, snacks, and blankets as we started our long trek toward the water drop site. . . [thinking about] the weight of the situation and work we were doing.

Living harmoniously in a group requires clear communication. All the students said the cohort had formed a bond and became a tight-knit community, as they began their Tufts journey together. Shi, who is originally from China and attended high school in California, said she was surprised by how much she learned from her peers outside of their coursework.

“One of the students had worked with refugees and asylum seekers. In conversations over breakfast, she told me what she did, and I learned so much. It’s just a sweet little family I know I will have on campus,” Shi said.

The Southwest is big. Really big. “When people think about the American Southwest, they think of the beauty of the landscape. You can get lost in all the red rock and mountains,” said Chisam. “But the longer you’re there, the more you realize it’s a real place with real people and real issues.”

Feng, who is from Farmington, Connecticut, noted that it takes two hours to drive across her entire home state. But in New Mexico, it takes that long just to get from rural areas to the nearest cities.

“We stayed in Truchas, New Mexico, and the city of Albuquerque is two to three hours away,” said Feng. “Throughout the trip, we stayed in remote areas where it took a long time to get to services that we’re used to having easy access to, like grocery stores or medical services.”

Other students noted the expansive sky, especially over Big Bend State Park in Texas, where the group camped for a midterm reflection. “At night, you can see so many stars. It’s like a complete 360,” recalled Waterman. “The skies are unbeatable in the Southwest.”

A New Opportunity for First-Year Students

Learning How to Listen and Have Hard Conversations

Going After the Youth Vote