When Artists Are Activists

In the early 1980s, artists across the country united to confront U.S. intervention in Central America in a movement documented by a new exhibition at Tufts

What can an artist do to make a difference in turbulent times?

One answer can be found in the exhibition Art for the Future: Artists Call and Central American Solidarities, on view now at the Tufts University Art Galleries in both the Aidekman Arts Center on the Medford campus and the School of the Museum of Fine Arts in Boston, through April 24.

Art for the Future is a case study on how a broad coalition of artists came together across the United States in the early 1980s to create Artists Call Against U.S. Intervention in Central America.

Their campaign to raise public awareness and galvanize resistance against the U.S.-backed atrocities in this region—from death squads in El Salvador to Contra terrorists in Nicaragua financed by arms sales to Iran—provided an example how individuals, not just artists, can unite to affect change, says Dina Deitsch, director and chief curator at Tufts University Arts Galleries. 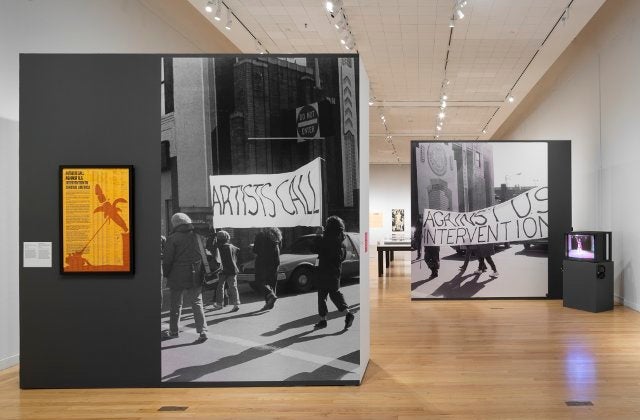 ​The entry to the exhibition at the Tufts Art Galleries on the Medford/Somerville campus. Photo: Peter Harris, courtesy of Tufts University Art Galleries
Heeding the call, artists in over two dozen U.S. cities—with more than 1,100 participating in New York City alone—put on over 30 exhibitions, along with performances, readings, screenings, concerts, marches, and other events in 1984.

Given the size and scope of the campaign, curators of the show now at Tufts chose to focus on activities in New York City, not only because it was an epicenter of campaign but because research for the show began in the archives of the Museum of Modern Art Library in Queens.

Hidden Away in a Library

In 2015, Erina Duganne, co-curator of the show, came across 12 previously undocumented boxes of materials from Artists Call while doing research in the MoMA Library. “The archivist mentioned some boxes related to Artists Call in the vault that had just been sitting there. They weren’t in the database. I was completely taken aback. No one knew how they got there,” says Duganne, a professor of art history at Texas State University.

She began to explore the materials, inviting artist Doug Ashford, art critic and activist Lucy Lippard, and other Artists Call organizers to visit the archives and examine the documents with her. “This was a major discovery. We needed to share this with the world,” she says. 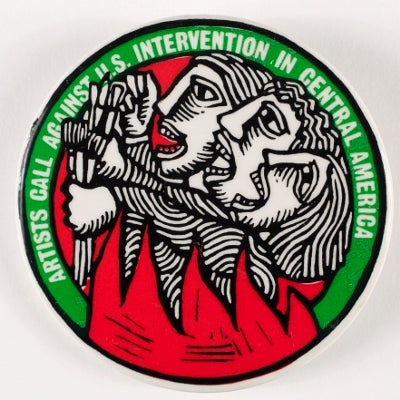 Peter Gourfain, Artists Call Against U.S. Intervention in Central America button. Courtesy of Doug Ashford.
Duganne brought her discovery to the attention of Abigail Satinsky, Tufts University Art Galleries curator and head of public engagement, who co-curated the show with Duganne. “My research has always been about how artists organize together around social movements, which is perfectly in tune with Artists Call,” she says. “The project grew with the depth and richness of the materials themselves.”

Seven years after the discovery of those 12 boxes, Satinsky and Duganne’s research has evolved into a major show. With works by more than 100 artists from the 1984 Artists Call exhibitions, newly commissioned and other pieces created since the ’80s, as well as an abundance of archival materials that show the efforts of organizers in their call to fellow artists, “this is our largest and most in-depth project to date,” says Deitsch.

Programming around the show is robust, with faculty talks, panel discussions, class visits, and workshops scheduled through April. Tufts University Art Galleries is also publishing a major catalog of the show, due out in March. “I think you could teach five courses out of this book,” Deitsch says.

Near the entrance of the Art for the Future galleries on the Medford campus is a photograph of three white handprints upon a dark red door. This striking image, El Salvador, Arcatao, Chalatenango province, 1980, by Susan Meiselas, depicts the signature of the Mano Blanca death squad left on the door of a slain peasant organizer.

On the wall beside it hangs Colombia-born Carlos Motta’s chronological list, printed on black-and-white newsprint, of a Brief History of US Interventions in Latin America Since 1946. On a plinth below is a stacked pile for visitors to take home and consider, which also have the images of Mano Blanca hands from the Meiselas photograph. This work echoes Motta’s enormous chalkboard version of the list that covers the entire back wall of one gallery at the SMFA.

A little further into the Medford gallery space stand a row of glass cases filled with letters, fliers, handwritten notes, and more from the MoMA Library archives. These materials and more throughout the show document how Artists Call successfully reached out and connected so many individuals into a united campaign. Looking up from these documents, one finds oneself surrounded by artwork that testifies to so many who answered the call.

Among the paintings and posters, sculpture, and audio-video presentations is a mixed-media interactive installation that invites viewers to literally connect with people in Central America.

In the El Salvador-born artist Muriel Hasbun’s Arte Voz work, viewers are invited to duck under a freestanding sculpture reminiscent of a domed radio tower where they find a digital stethoscope and earphones to transmit their heartbeats and listen to those of gallery-goers at Artist Call NOW, a concurrent show at the Cultural Center of Spain in San Salvador.

Nearby, Leon Golub’s acrylic-on-linen painting Napalm I, draws parallels between the focus on Central America and the war in Vietnam, reminding viewers that the mission of the Artists Call campaign, like that of the current show at Tufts, is about calling for justice—in any era. 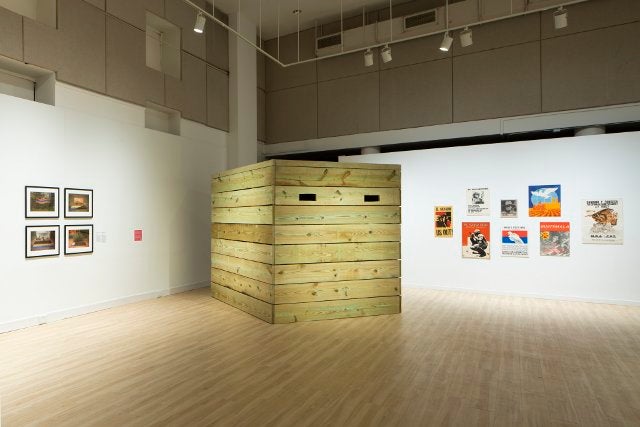 At center: Hans Haacke, “U.S. Isolation Box, Grenada, 1983,” 1984. Wood planks, hinges, padlock, spray painted stencil lettering, built by Jeff Plate. Photo: Peter Harris, courtesy of Tufts University Art Galleries
One of the most powerful works, on display at the SMFA galleries, is Hans Haacke’s US Isolation Box, Grenada, 1983, a replica of a portable chamber that the New York Times reported U.S. troops used to detain prisoners in the 1983 invasion of the Caribbean island nation of Grenada. The box, measuring a little over 8 cubic feet with four small openings for ventilation just above eye level, brings a sense of the battlefield into the gallery.

According to its label, 19 American soldiers, 110 members of the Grenadian militia, and 71 Cuban construction workers were killed in the invasion.

A more intimate piece nearby, a small photograph by the Ecuador-born photographer Bolívar Arellano, shows two hands that appear to clasp each other in solidarity—until the viewer reads its title on the accompanying label: Hands of Dutch Journalists Murdered in El Salvador.

The Call to Activism

“Artists Call did not stop U.S. intervention in Central America, but we know the campaign had a lot of reverberations,” says Satinsky. Money raised went to the Association of Sandinista Cultural Workers in Nicaragua and to the University of El Salvador.

A group in Boston was formed called Arts for a New Nicaragua who worked with the Artists Call chapter in Boston. Artists from the Call went to Washington, D.C. with a banner emblazoned with a very long list of artists’ signatures. They laid this banner on steps of the U.S. Capitol, says Duganne. Some of the artists stayed there to lobby legislators.

“If we measure success only by what bills are changed, how much money is raised, and how it is used, then art is always going to fail,” Duganne says. “We need to think about how networks of communities were created, awareness raised, and of the work these artists went on to do.”

“I think it’s important that Abby and Erina organized this project during the Trump era,” Deitsch says. “The organization of the exhibition was very much in response to a time when this sort of activism becomes very important to people struggling with the question, how do I make a difference if I’m not an activist per se.”

“I found those boxes by chance,” says Duganne. “If I hadn’t, someone else would have. But I did, and that led to this beautiful collaboration with Tufts. Artists Call left a legacy for this exhibition. This exhibition itself is a legacy for the future.”

The Tufts University Art Galleries are located at 40 Talbot Avenue on the university’s Medford/Somerville campus and at 230 The Fenway at the SMFA at Tufts in Boston. Gallery hours are Tuesday through Sunday, 11 a.m. to 5 p.m. For more information, visit artgalleries.tufts.edu.

Rob Phelps is a freelance writer based in Quincy, Massachusetts. Send comments to now@tufts.edu.