With Afghan Schoolgirls in Peril, These Volunteers Rushed to Help

After Kabul fell to the Taliban last August, Afghans thronged the capital’s airport, hoping to leave before the U.S. military withdrew following nearly 20 years of war. Many feared they were targets for reprisals by the Taliban, the militant group known for its strict interpretation of Islamic law.

People with ties to Tufts sprang into action to aid a particularly vulnerable group: schoolgirls from the persecuted Hazara community.

There was no playbook for their efforts and no guarantee of success. Yet they had to try, said lawyer Jennifer Selendy, J90. “It really struck me as one of these moments where we will be judged by what we do.”

Selendy and others in the Tufts network, initially connected through the Institute for Global Leadership, have helped about 450 Afghans reach safety so far. Here is the story of their efforts, told in their own words.

Even before the resurgence of the Taliban put him on heightened alert last summer, Aziz Royesh had received death threats for his progressive ways. He founded the Marefat School, located in a predominantly ethnic Hazara neighborhood of Kabul, to promote education and principles such as gender equality, pluralism, and democracy. The Hazara, most of whom are Shiite Muslims, are a persecuted minority in Afghanistan, targeted for discrimination and violent attacks because of their ethnicity and religion. The school had a student body of about 4,000—nearly half of them girls—in kindergarten through 12th grade.

His son, Abuzar Royesh, A16, graduated from Marefat before attending Tufts. Now an entrepreneur in the United States, the younger Royesh feared for his father and other relatives during the Taliban takeover. He was thrilled when, with the help of a global network, his parents and siblings managed to get into the Kabul airport on August 18 and on a flight to Qatar. They made their way to the United States, where his mother, who is in her late 40s and was nine months pregnant when they evacuated, gave birth to a daughter. The family named her Raha, which means “free.” But they all feared for the schoolchildren who were left behind. 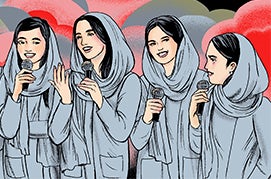 Many of the schoolgirls who fled from Afghanistan are singers, which put them at special risk, said Jennifer Selendy. “The Taliban is pulling people out of their homes and killing them for singing." Illustration: Agata Nowicka

Abuzar Royesh: Once my family were out, we thought, “OK, so now, what about others?” My dad said that some of the most well-organized groups of girls from the school were also the highest at-risk groups, the singers and the martial artists. They're at high risk because the singers appeared on national TV and the martial artists had gone to international competitions.

Heather Barry, associate director of the Institute for Global Leadership (IGL) at Tufts, reached out to Royesh to see how he was doing: Abuzar told me his family had gotten to Qatar. I asked: Is there anything the IGL community can do? He came back with what they were trying to do with the students. I sent his request for help out to the IGL network.

Jennifer Selendy, J90, a lawyer based in New York City who serves on the advisory board of the IGL: I didn't know Abuzar and I didn't know the story of the Marefat High School, but the plight of women under the Taliban was on my mind. When I got the email from Heather, I thought, this is a moment in history where the outreach is so visceral and so desperate, you know that it's a life-or-death situation. It really struck me as one of these moments where we will be judged by what we do to try to protect the lives of these women and girls. 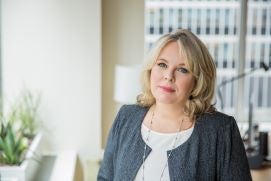 When lawyer Jennifer Selendy learned about the danger faced by Afghan schoolgirls, she thought, “we will be judged by what we do” to protect them—and she responded immediately. Photo: Courtesy of Jennifer Selendy

Some of the first girls that we took out, they're singers. The Taliban is pulling people out of their homes and killing them for singing. As this is happening, they're announcing in the mosques that if you have single girls and they're not married off, we're going to take them. They're going to be married off. I felt that I had no choice but to do everything I could to help them.

There were eight of us [helping Royesh], across generations, Afghan expats, British citizens, American citizens, connected only by Zoom and WhatsApp. That's all we were, is eight amateurs with a strong will to do something. We were meeting every day and we were exploring every opportunity possible, through our own networks, connections to governments, politicians, foreign countries, everything you can imagine. It was initially to get people out through the Kabul airport while the Americans were still there.

Phillip Torres, A94, A24P: I don't get too many emails from IGL, but it holds a very dear place in my heart. [Founding Director] Sherman Teichman and Heather [Barry], they built a family. I could pick up a phone and call somebody that was in a class years before I was, and there's instant connection, instant willingness to help.

I didn't really know what I could do at the time, to be honest, so I just sent the message around to friends and family, including my mother. 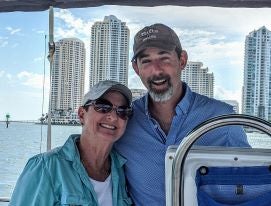 Jane Torres, J68, A94P: With these educated young women, it became apparent that what was needed was a safe harbor, a country that would take them, because they couldn't cross into [another country] without a third country saying they would take them. I have some very dear friends who have a connection to the president of Ecuador, who was wonderful, and said, “Yes, of course we can do that.”

Royesh: We partnered with this other organization that had buses organized to go into the airport. We had people ready to get on the buses when the local coordinator called and said, “It's not feeling right. There's something off.” It was just based on that intuition that we made the decision to cancel. And that night, that attack [a suicide bombing that killed about 170 civilians and 13 U.S. troops] happened on the airport.

Selendy: When the suicide bomb happened, it was like a door just decisively shut. There was no way to get people into the airport after that.

Phil Torres: We were all doing our best to try to figure out plans A, B, C, D that might work. I was speaking with former U.S. intelligence officers, military diplomatic corps for the U.S., people that I was connected to through friends here in Chicago. You never know which path is going to be successful. You have to be able to pivot.

Royesh: We were briefly looking at overland routes to Tajikistan, to Uzbekistan, to Pakistan, but we didn’t want to send this conspicuous group of schoolgirls, who are ethnically different than the majority of the people who live along those highways, through the land route.

The craziest part was that, at some point, we were considering buying a plane, landing it in an airstrip right outside Kabul. We ultimately decided it was too dangerous.

Selendy: But then there was a flight out of Mazar-e-Sharif [about 260 miles from Kabul].

Royesh: We managed to send 26 people overland to Mazar-e-Sharif, and they got onto the first flight that left.

Then Jennifer arranged for a charter flight out of Mazar. We put most of the responsibility for getting there in the hands of the girls themselves and their families, to decide what was safe for them and what was not.

They had to wait there for two weeks, even though we had paid for the plane. We didn't have permission from the Taliban. Then the Taliban announced their cabinet. There was a new minister of aviation who didn't want the flight to take off.

Selendy: We had the go, the signal that the flight had a takeoff time. So that was pretty disappointing.

Then it was like, well, there's a new minister, but we're negotiating. How long do we leave people? They were running out of money. They were wearing thin their welcome at relatives' homes and whatnot in Mazar. We ultimately made the decision that it wasn’t going to be fruitful, and we started looking [again] at overland routes.

Royesh: We had around 230 people who were in different parts of Mazar. And we had to call all of them and say, “Come back to Kabul and go to the east to the land border in one day.” This is a 16-hour drive through Taliban checkpoints and rocky roads.

One of our team members, a journalist from the U.K., called a Pakistani government office and somehow, she convinced the head of that office to give us gate passes. We thought, “This is too good to be true.” But it did work, and that's how we got our second group out as well. It's just through that phone call to the person who made it happen.

A first group of schoolgirls and their families, about 250 people, got to Pakistan using the visas from Ecuador that Jane Torres had acquired. Then Canada stepped in to fly them to Saskatoon, Saskatchewan, where they have resettled. A second group of about 170 girls and their families also made it to Pakistan with visas to Ecuador and have applied for visas to go to Canada.

After Heather Barry shared Abuzar Royesh’s request for help, more than 40 IGL alumni responded with government and on-the-ground contacts, and many more contributed financially to the effort.

Royesh and others founded the 30 Birds Foundation to support the schoolgirls. To date, they have helped about 450 people leave Afghanistan. They are fundraising to help the girls pursue their education and cope with the trauma of their experiences.

Selendy: We’re not rescuing them. They really rescued themselves. We created some opportunities and they had to make absolutely life-altering decisions about whether to try to cross the border, about whether to go through various Taliban checkpoints and move their family across the country.

If there is a future for Afghanistan, it’s not through American occupation. It's through these girls and what they can do with an education.

Royesh: This community are going to become leaders of Afghanistan tomorrow, or even leaders within Saskatoon or wherever they’re settled, and we need to help them become that. We don’t want to risk having them become little islands all on their own without support. We want to keep that community of Marefat together abroad.

In the Chaotic Evacuation of Afghanistan, the Tufts Network Arranged a Midnight Convoy