Tufts Art Galleries holds its first Art Datathon to examine how gender, race, and artistic mediums are represented in the university’s collection

In 2020, Dina Deitsch, director and chief curator of Tufts University Art Galleries, led a public art audit that took a hard look at the overwhelming dominance across Tufts’ campuses of art by—and depicting—white males. From that analysis (conducted as part of the Tufts as an Anti-Racist Institution initiative), she and the Public Art working group concluded that while the university’s imagery wasn’t overtly racist, it was exclusionary because as it did not include any people of color.

Deitsch and the group began looking for a way to prompt discussion and to effect change through a deeper analysis of the relevant data about the Tufts University Permanent Art Collection.

When she reached out to Anna Haensch, a senior data scientist who was newly arrived at the university’s Data Intensive Studies Center (DISC), Deitsch’s timing was ideal. “Dina sent me a spreadsheet with a few pie charts and asked if I could do anything,” she recalled. “I was still deciding how to spread my time across data projects and was delighted to make room for this one.”

Haensch, who appreciates visual art in her downtime, initially generated choropleth maps using the Python programming language and a JavaScript library designed for producing interactive data visualizations. “I think questions of diversity are geospatial questions and questions of origin,” she said. “So I began by placing the collection on the world map and to see where the creators are from—and what story our collection is telling.”

When it came to the collection’s 480 portraits, for example, Haensch discovered 187 instances of North American artists depicting other North Americans.

Confronted by the significant amount of analysis still needed in terms of how gender, country of origin, and different mediums are represented in the collection, Haensch imagined the Art Datathon to bring together academic experts, faculty, and students to push even further through the needed analysis.

Afterward, armed with the Art Galleries’ dataset, students from computer science, museum studies, and several other programs split into four cross-disciplinary groups that circled up in Cummings Center. Their assignment: choose a theme for their group and generate a list of questions to answer through data analysis during the datathon. 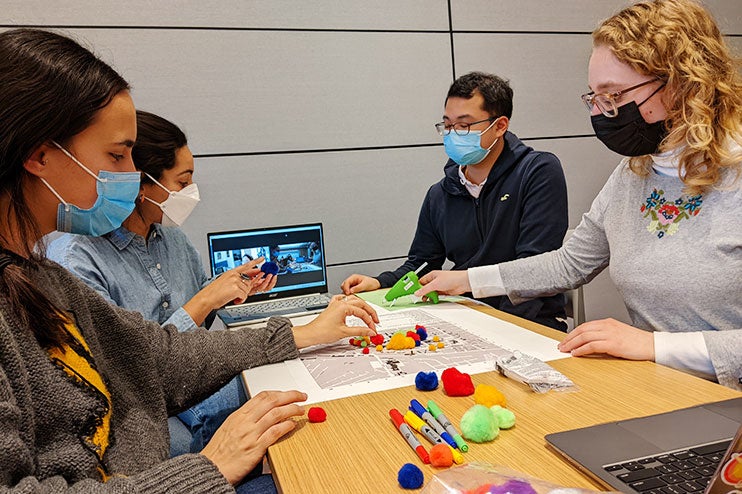 Visual work products from the datathon’s cross-disciplinary groups included a physical map in this photo, which showed—for work currently on view at Tufts—the gender of the artist and the medium they used. Photo: Anna Haensch
Computer science graduate student Ashley Suh said her group got stuck trying to answer tough questions on Saturday afternoon. But offering them needed clarity and perspective was a panel including mathematician Chad Topaz, who led a groundbreaking 2019 study on the demographics of artists represented at major U.S. museums, and Kelli Morgan, Professor of the Practice in the History of Art and Architecture department at the School of Arts and Sciences and a curator-activist whose research centers on anti-racism. Diana Greenwald, who led the 2019 National Gallery of Art Datathon, was also a panelist.

Suh explained, “We started to build a story in our heads about how diversity in the collection is represented given the artists and their country of origin.” They learned that it’s not always straightforward, either.

For example, one major finding was that around 100 works in the collection come from artists in Africa. However, the analysis found that 95 percent of those pieces are from a single white male artist from South Africa. Suh concluded, “One of the big takeaways is that you really need to dig deeper in the data to get a deeper sense of diversity and representation.”

One of the visual products that Claire Pellegrini’s group devised was a physical map that showed, for work currently on view at Tufts, the gender of the artist and the medium they used. The gender-representation figures were represented using different sizes and colors of pom-poms. This exercise led Pellegrini, a master’s student in Museum Education, to ask, “How fair is it to consider gender when the artists aren't self-reporting that information and it’s based on assumption?”

Deitsch expects that the numbers crunched at the datathon will serve a critical purpose: guiding a new acquisition group forming this spring, which will focus on diversifying the university’s collection. Haensch also believes the datathon can be part of building bridges between DISC and the arts and humanities. For example, Director of the Museum Studies Program Cynthia Robinson brought her entire class to the event. On the strength of their participation, Robinson and her students decided to add some digital and data science methods to the course’s remaining sessions.

Tufts Art Galleries has also sent out an extensive questionnaire to the known living artists with work in the collection. Deitsch and Haensch hope the responses can form the dataset for the next datathon.