When Peter Levine’s father passed away in 2008, he left behind a collection of nearly 30,000 books. Stacked tightly on shelves that literally filled the Syracuse home that Joseph and Deedee Levine shared, the books were mostly about Western European cultural and intellectual history, as the late Joseph Levine was a distinguished professor of history at Syracuse University.

“It was the working library of a historian,” says Levine, the Lincoln Filene Professor of Citizenship & Public Affairs and Associate Dean at the Jonathan M. Tisch College of Civic Life. “People ask, ‘did he read all the books?’ And the answer is no, but historians don't read all the books. They consult. He used all the books and understood what was in them, so only bought books in languages he could read—English, French, Italian, and Latin.”

His father did not leave instructions for how to handle his books after he died, and at first, Levine wasn’t quite sure what to do with them. So he took out an ad in the New York Review of Books, offering to donate the collection to a good cause.

He heard back from a group of American expatriates in Switzerland, who had adopted the National and University Library of Bosnia and Herzegovina in Sarajevo as their cause. Most of the library was destroyed in 1992 when it was targeted and shelled during the Bosnian War, and the group thought that Levine’s books could bolster the library’s rebuilding efforts. And thus began the process of packing and shipping 25,000 books to Bosnia.

‘A Collection on a Different Level’

“I don't think there are very many private collections in the United States that are this big,” Levine says, recalling the library-style bookcases narrowly spaced throughout the house where he grew up. “It filled every available spot in a standard-size single-family home, from the basement to the roof, including all the stairwells. There were often two rows of books on each shelf, so there was a set of books behind the books you could see.” 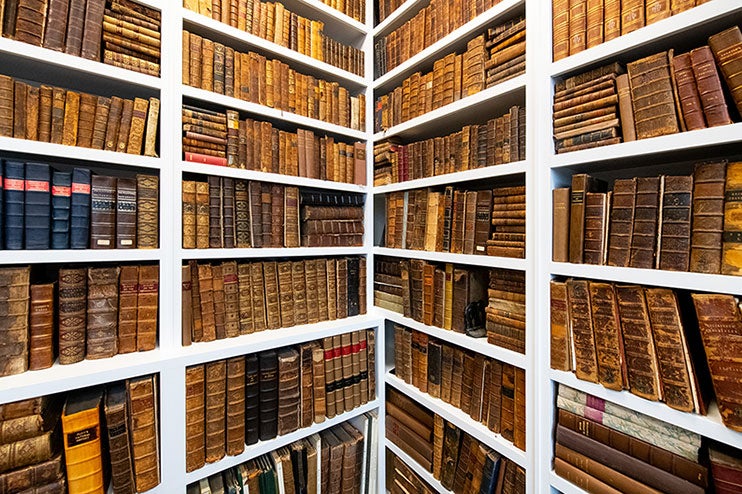 Levine’s father picked out each book individually from used book stores and wholesale book markets, mostly in New York and London, where he lived for months at a time while teaching Syracuse University students abroad and where he often spent his sabbaticals and summers.

While it could have been expensive to buy so many books, Levine says his father was able to build the collection because he used his deep knowledge of wholesale book markets to not only buy books, but sell them, too. Every time he made money on a purchase, he bought more books.

“For example, once he came across a very rare edition of Immanuel Kant. So, he sold it to Yale’s Beinecke Rare Book Library and bought a lot of books with the money. His collection has zero truly valuable books, because he knew exactly what those were, and he would always sell them in order to build the collection for the content,” says Levine, who is also a professor of political science.

Thanks to generous contributions from friends, family, and colleagues, Levine was able to hire a professional moving company to pack up the books, which turned out to be a wise decision. It took three movers working for seven days to fill more than 1,000 60-pound boxes, for about 30 tons of weight. He says even the professionals were surprised by the volume. The books filled two shipping containers, which were loaded onto a ship headed for Europe. About five months later, the books arrived safely at their new home in Bosnia.

It was the second trans-Atlantic journey for many of the books, since the majority were purchased in England and shipped to his home in the U.S. Levine recalls how his mother used to pack up his father’s purchases and ship them home by the literal ton.

“One year, probably in the 1970s, the shipping warehouse in London was robbed and his books were stolen. The books were recovered by Scotland Yard, but there was no way to prove that my dad had owned them, because they were just this pile of books. Scotland Yard put them on sale at an auction, so he bought them back and sent them again,” says Levine with a laugh.

Where the Books Are

Not every book in the collection went to Bosnia. Levine kept a few thousand volumes that were printed between 1500 and 1820, and he didn’t think would survive travel well. They now line the walls of his office at Tisch College, rising eleven feet on three sides.

Several hundred volumes are at Montpelier, James Madison’s house in Virginia. After Madison died, his family sold his book collection to pay off his stepson’s gambling debts. But scholars kept a list of the books and the editions he owned back in the early 1800s.

“We went through my dad's collection after he died and found the same editions and the same books that Madison had. Those are on permanent loan to Montpelier, displayed on a bookshelf to show what Madison's collection would have looked like,” says Levine.

He’s grateful to the library in Bosnia for giving the collection a home and for the role the library plays in serving the public.

“It's not like we were sitting on something valuable that we kindly gave to Bosnia. It's more like the national library in Bosnia enabled us to do something satisfying with his books. If they hadn't taken the collection, I'd still be trying to figure out what to do with it,” he says.

Angela Nelson can be reached at angela.nelson@tufts.edu

The Greek Goddess and NASA’s New Mission to the Moon