As the War in Ukraine Continues, Questions About How It Ends

With resistance to the Russian invasion much stronger than expected, the conflict’s future is uncertain, Tufts experts say

As Russia continues its assault on neighboring Ukraine, more than 3 million Ukrainians have fled their homes. International sanctions are hitting the Russian economy hard, while Ukraine has mustered a resistance that seems to have been unexpected. Many observers are wondering: What’s next?

“For Ukrainians, it is an existential struggle for survival,” said Oxana Shevel, an associate professor of political science at Tufts. “It’s really nothing less than that. Ukrainians are very well aware that [Russian leader Vladimir] Putin’s end goal is the destruction of their sovereign nation as such. He denies Ukrainians a separate identity and Ukraine’s right to exist as a sovereign state.”

Russia launched the invasion on February 24. Its troops have now occupied portions of southern and eastern Ukraine, and are pressing from the north on Kyiv, the capital.  They are hitting civilian targets with increasing frequency and thousands of Ukrainians have been trapped without food, water, or power.

The conflict follows incursions into Ukraine by Russia in 2014, which led to the annexation of Crimea by Russia and the establishment of pro-Russian proxy “people’s republics” and de-facto Russian occupation of parts of the Donbas region of eastern Ukraine.

In response to the current unprovoked invasion, the U.S. and most other Western nations have imposed strong economic sanctions against Russia, which Putin has decried as “economic warfare.”

To learn more about the war and its possible outcomes, Tufts Now spoke with two experts on the conflict. Shevel, who is from Ukraine, has researched the origins of separatist conflict in Donbas and memory politics in post-Soviet Ukraine. Chris Miller is an assistant professor of international history at The Fletcher School and author of Putinomics: Power and Money in Resurgent Russia (2018) and The Struggle to Save the Soviet Economy (2016).

Tufts Now: How has Putin miscalculated this war so far?

Oxana Shevel: Clearly what Russia planned for the war didn’t happen—that plan was by all accounts some sort of very quick blitzkrieg.

One of Putin’s great misconceptions about Ukraine is that it is essentially Russian. He thought that once Russian soldiers came in, they’d be greeted as liberators and that they could topple the government of Zelensky, install some sort of puppet government, and withdraw, making Ukraine essentially a quasi-state, ruled by Russia. 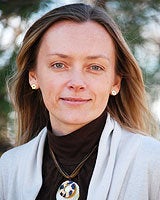 Oxana Shevel
That clearly did not happen. Ukrainian identity has been much more anti-Russian since 2014. Even in the south and east, which are historically the most Russia-friendly parts of the country, Russian troops were met with people with Ukrainian flags, cursing at them in Russian, telling them to go home.

What are some scenarios for how this war plays out? Is it a stalemate? Is it destruction of Ukraine? Is it a lingering, Afghan-style insurgency?

Chris Miller: All of those outcomes are plausible at this point. I think anyone who says they know how this is going to turn out is overconfident in their ability to see the future.

It’s certainly possible that we get a cease-fire that proves durable, whether it’s coming in weeks or months.

But it’s also very plausible that Russia tries to occupy big chunks of the country, as it appears to be doing with cities in the south of Ukraine, and fails to occupy the rest of the country. Then they would have an ongoing conflict that is partially a conventional conflict, but also partially an insurgency in the areas that Russia has occupied. If the war heads in that direction, it could last for a very long time. Insurgencies often take years to resolve

Shevel: I don’t think there is a clear end game for Putin. It’s hard to imagine what would be an exit scenario.

Given the extent of Russian propaganda, they could try to claim victory—something along the lines that they destroyed a lot of Ukrainian military capability. Then they would try to hold onto the territories that they occupied so far, parts of southern Ukraine and a few places in the east. It wouldn’t be an easy occupation.

Why would occupying Ukraine be difficult for Russia?

Shevel: Whatever territory Russia may be able to occupy militarily, they would need a full-scale occupation force to control. That’s problematic for all sorts of reasons.

Russia doesn’t have manpower for sustained occupation like this. It would require the commitment and the resources that they simply don’t have. It would have to be very brutal, repressive occupation of those regions, because those regions don’t want to be occupied by Russia.

Ukrainian resistance is certainly not going away. People are incredibly committed. This is another thing that I think Russia and the West underestimated. For Ukrainians, it is an existential struggle for survival. It’s really nothing less than that. Ukrainians are very well aware that Putin’s end goal is the destruction of their sovereign nation as such. He denies Ukrainians a separate identity and Ukraine’s right to exist as a sovereign state.

In negotiations to try to bring about a cease-fire, what is Russia demanding? 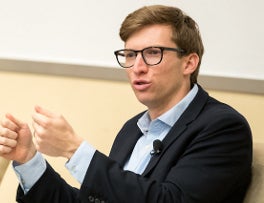 Chris Miller. Photo: Paul Rutherford
Russia is demanding that Ukraine promise not to join NATO, and that it not procure offensive weapons systems—even though Ukraine didn’t have that much to start with that was genuinely offensive. And Russia is demanding—and this is the hard part—that Ukraine give up the Donbas region and give up Crimea. Ukraine is not willing to do this.

It’s been very, very uncommon in the past 75 years for countries to give up their own territory under threat of force. So long as Russia keeps demanding this, it’s going to be very difficult to envision any sort of plausible cease-fire.

Shevel: Ukraine was never going to enter NATO. Putin must know that. There was no consensus within NATO, and no open consensus in Ukraine for that matter before 2014 about Ukraine joining NATO. But even after 2014, when Ukrainian opinion changed to favor membership, NATO’s major powers didn’t want Ukraine in the alliance.

What tools does Russia have to keep pressing ahead with the war?

Shevel: The only leverage they now have is indiscriminate shelling of Ukrainian population centers, which creates huge humanitarian consequences. That’s expected to continue in the short term, but is that a sustainable strategy for the long term? I’m not sure, in part because of the size of the country.

I think it’s a question of whether Putin is going to be defeated in the short term or the long term. I just don’t see a path to victory for him. It could be sort of exhaustion on the battlefield. It could be a combination of that plus some sort of domestic processes within Russia. They even deny that they invaded Ukraine. I mean, you can’t get more Orwellian than that. So long term, I see that ending badly for Russia.

What do the earlier wars that Russia has fought under Putin suggest about this one?

Miller: If you look at most of Russia’s wars, with the exception of Chechnya—whether it’s Syria, Russia’s war in Ukraine 2014-2015, Georgia in 2008—the war aims have been limited. Russia fought for a short duration for specific concessions, rather than completely changing the government of a country. Chechnya was a bit different because it was internal to Russia.

The question right now is whether Russia is going to accept a negotiated outcome, more like the wars Russia fought in 2008 and 2014, and try to cut a deal with Ukraine, or whether the Kremlin will maintain its maximalist demands, which may well result in a war that lasts for months rather than weeks, or potentially even longer than that.

In response to the invasion, the international community has imposed tough economic sanctions on Russia and some major Western businesses have pulled out of the country. How will this affect the Russian economy, in the short term and long term?

Shevel: It clearly already is having tremendous impacts. I think it’s really unprecedented. The country was unplugged virtually overnight from the global economy. Prices are rising; jobs, goods, and economic opportunities are disappearing. Throughout his tenure, Putin’s legitimacy rested on the claim that his more authoritarian rule brought economic stability, in contrast to more democratic but economically chaotic 1990s.

As the economy tanks, with no prospects for improvement in the near future, Putin’s legitimacy can get undermined, and this in turn can set off processes in Russian society, and also among the elites, that can endanger Putin’s rule and political model.

Miller: The consequences are huge and tremendously negative. Russia has been severed substantially from the international financial system. Financing in Russia has become substantially more expensive; investment will be lower for the foreseeable future.

Also, the technological impacts are immense. Russia is hugely dependent on technologies from the West and from America’s allies in Asia—Japan, South Korea, Taiwan. And that’s not just digital technologies and computing, but also machine tools, the types of equipment you need to outfit factories. We’ve already seen dramatic stoppages of factory production in Russia.

Even though the costs are really going to be substantial domestically, I don’t know that means that they’re going to change policy in Ukraine. But certainly their impact will be felt in Russia for not just years, but for decades to come.

The sanctions seem to be affecting the lives of average Russians and might decrease Putin’s support. But does Putin need supporters? Elections don’t seem to be terribly free in Russia.

Miller: Elections don’t matter, or they don’t matter in a direct way, and popular protests are not going to be large enough to impact the political system in the short term. In the longer term, the Russian government does face a much more complicated balancing act in terms of keeping the population quiescent. But I don’t think that is going to be relevant over the next couple of weeks or even couple of months.

The Kremlin has enough runway in terms of its ability to repress the population and avoid any feedback into its foreign policy choices, such that it can make decisions in Ukraine without really thinking hard about domestic politics at least for the next couple of weeks and couple of months.