At the NCAAs, Claire Brennan wins the 200 freestyle and she and teammates top the 800 freestyle relay

The Tufts women’s swimming and diving team made history at the NCAA Division III championships last week in Indianapolis, where they won national championships in two events and had their best team finish since 1982.

Junior Claire Brennan, A23, became the first woman in Jumbo history to win a swimming national championship on March 17 when she won the 200 freestyle with a 1:48.46 time. Many Tufts women have competed at the NCAA meet since the program was started in 1974, and 61 had achieved All-American status, but Brennan was the first to win an NCAA swimming race.

She joined former diver Kendall Swett, A08, the one- and three-meter national champion in 2008, as the only members of the Tufts women’s swimming and diving program to win NCAA championships.

The next night, the Jumbo 800 freestyle relay won the national title with the foursome of Katelin Isakoff, A23, Abby Claus, E22, Brennan, and Mary Hufziger, A22, putting together a 7:19.17 winning time. It marked the first relay NCAA championship in Jumbo history.

Led by both of these performances, Tufts placed seventh as a team at the NCAA championships for their best national finish since 1982.

“This team cares deeply about each other and truly operated with ‘one team’ as our motto,” said head coach Adam Hoyt, who was named NCAA Division III Women’s Swimming Co-Coach of the Year at the conclusion of the meet. “I believe that the synergy and strength created through being ‘one team’ led our athletes to perform at the highest level and truly embrace how special it was to compete. I am so proud of our women and everything we were able to accomplish this year.” 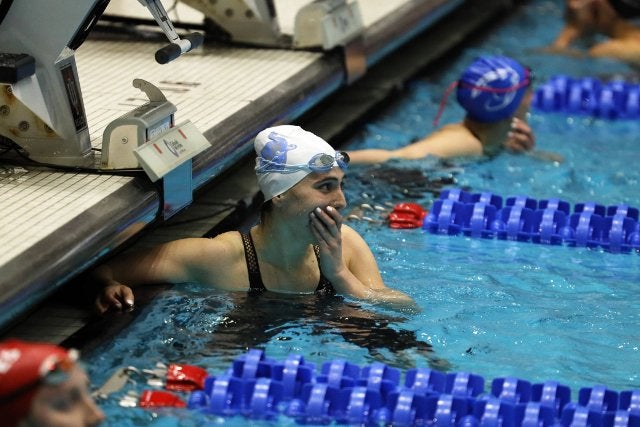 “It is so crazy and surreal to be a national champion, especially after not getting to compete here for the past two years, but I’m so grateful to be here with my team,” said Claire Brennan. Photo: Jacob Walton
Brennan was competing at the NCAA championships for the first time. She qualified nationally as a freshman in 2020, but the meet was canceled due to COVID-19. Then the entire 2021-22 season was canceled because of the pandemic.

After posting the best time in the 200 free preliminaries, Brennan dueled down the stretch with Lydia Dacorte of Wheaton College in the championship race. Brennan won the by less than a half-second in a 1:48.46 time. Hufziger finished fourth, marking the first time in program history two Jumbos have earned All-American finishes in an NCAA swimming event since 1990.

“It is so crazy and surreal to be a national champion, especially after not getting to compete here for the past two years, but I’m so grateful to be here with my team,” Brennan said that night. “I knew it would be a tough heat in the final, but thought I had as good a chance as anyone there. Training and competing with Mary all year was the most important key to the victory. We always push each and have so much fun racing together.”

Brennan and Hufziger then joined their teammates for the 800 freestyle relay on March 18, where Tufts was the number one seed; Denison was the number two seed.

In the championship race, Tufts was trailing the Big Red by two lengths at the halfway point. In a thrilling comeback, Brennan swam a 1:48.85 split that gave Tufts a 5:30.86 mark through 600 yards compared to Denison’s 5:28.95, a difference of 1.91 seconds. Then in the anchor leg, Hufziger swam an outstanding 1:48.31 split that launched Tufts to victory by a 0.08 margin.

“I didn’t even look at the scoreboard to see if we won,” Hufziger said. “I saw the reaction of my teammates on the side of the pool, and I knew we had done it. I will never forget the feeling for years to come. I remember my sophomore year the coaches told us that there was potential for a national championship relay. It’s surreal that it actually happened, but it goes to show what resiliency can accomplish.”

The two swimming titles capped a week in which Tufts student-athletes won four NCAA championships overall. At the NCAA track and field meet on March 12, Lia Rotti in the triple jump and Jaidyn Appel in the high jump both had victories. These great achievements were made even more meaningful because of the challenges that were met to accomplish them.

“It made these past two years of constantly battling obstacle after obstacle worth it,” Hufziger said. “It goes to show that having a little bit of hope can go a long way.”

Director of Athletic Communications Paul Sweeney can be reached at paul.sweeney@tufts.edu.