How do you teach one of the most challenging authors in American literature to a group of freshmen—Kurt's grandson among them? Last fall Mark Lannigan, A23, found out

Last August, Mark Lannigan, A23, was scrolling through the student list for The Politics and Philosophy of Kurt Vonnegut, a course he was offering through Experimental College’s Explorations peer teaching program, which celebrates its 50th anniversary this fall.

He was almost at the bottom when a name jumped out at him: Oliver Vonnegut, A25.

A fan of the famous author since before high school, Lannigan had read all of Vonnegut’s works and connected with a Vonnegut society, museum, and library, spending years poring over his philosophy of death, his critiques of modern liberalism and the modern state, and the mysterious feeling of something profound underlying it all, waiting to be decoded.

Lannigan designed his Ex College course hoping not only to introduce students to political theory and philosophy, but also to spark the same curiosity and enthusiasm that had propelled him through Vonnegut’s works. 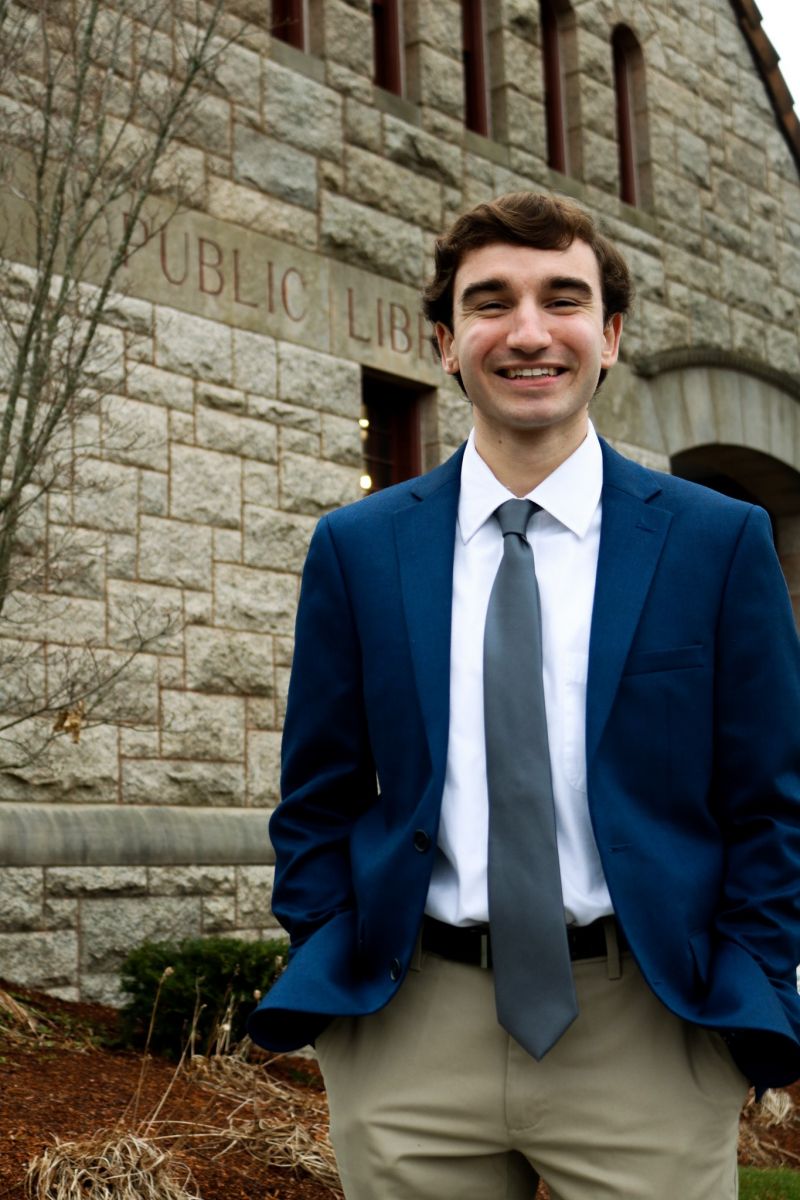 “I had a very strange moment where I was like, What is this? What’s going on? It was almost like a karass,” said Lannigan, referring to Kurt’s concept of a group of people mysteriously brought together through fate.

Lannigan emailed Oliver and asked if he was related to Kurt. Oliver answered by signing his reply, “Third in line to the throne of the Vonnegut dynasty.”

Grandson of the famous author, Oliver had always stayed well clear of Kurt’s works. “This fame thing has no appeal for me. I have known from the age of 6 I want nothing to do with any of that,” he said.

He’d read just one of Kurt’s books: Slaughterhouse Five, which had been assigned in high school. He mostly remembers the awkwardness of reading his grandfather’s sex scenes, and a remark made by a good friend: “I get it now. This book was written the way your brain works.”

“That was just a devastating insult,” Oliver said. “It’s intentionally the most chaotic and disorganized book ever.”

An aspiring political science and philosophy major, Oliver picked Lannigan off the list of Ex College peer mentors, seeing he had the same major. Then he noticed what Lannigan was teaching. “Ah hell, you’ve got to be kidding me,” he recalls thinking. And then: “Okay, what the hell. I probably should learn a little bit about Kurt’s work, because I’m not going to do it on my own.”

The first class, Lannigan told students they would be learning alongside Kurt’s grandson—just as Oliver walked through the door. “And that’s him,” Lannigan said, to a collective gasp.

Lannigan was initially nervous about having Oliver in the class—particularly because they would be critiquing his grandfather’s unorthodox and controversial ideas, and outdated and sometimes offensive language.

He wondered whether he should change his plan, which centered on reading and discussing Kurt’s novels Cat’s Cradle, Sirens of Titan, and Player Piano and some of his essays—occasionally with the help of visiting Vonnegut scholars, who were now familiar with Lannigan. But Amy Goldstein, the Ex College associate director, advised him simply to make sure Oliver was interested and learning something, and otherwise to go ahead as planned.

And in fact, Oliver turned out to be readier than anyone to criticize his grandfather, often taking the opposing position whenever people supported Kurt’s point of view too enthusiastically.

“People tend to think of Kurt as this wise, benevolent, great savior come down to spread the truth to us all,” Oliver said. “But it is also worth remembering he was very much a flawed human being.”

Often if the class couldn’t understand something Kurt had meant, they asked Oliver. Sometimes Oliver able to offer a bit of insider insight—such as the fact that Kurt had failed organic chemistry in college and was jealous of his older brother Bernie, a scientist, which might have informed his negative depictions of science.

At other times, Oliver was just as clueless as anyone. But he always managed to entertain, often sitting in the window seat instead of a chair, calling Kurt “Gramps,” and writing joking remarks on class feedback cards. “It became Oliver as a comic relief of sorts,” Lannigan said.

“The Vonnegut thing is really, as my father would say, a leg up to nowhere,” Oliver said. “The class was my excuse to have a little bit of fun with it, and to actually discuss the parts of Kurt and his writing that I do think are interesting, and to explore that aspect of me.”

It was also an opportunity to educate his teacher. Oliver would often show up half an hour early with little-known facts about Kurt: He couldn’t cook. He was embarrassed about his skinny legs. He threw all his energy into writing, often at the expense of family.

“Oliver would consistently bring me stories about what I’ll call the personal failings of Kurt, to try to knock him down in my mind—not his writings, but as a person,” Lannigan said.

As for Oliver, the class did shift his feelings toward his grandfather’s work—especially Cat’s Cradle, his favorite novel of the class. “The biggest reason I enjoyed it was that he wasn’t trying to be like other authors,” he said. “He has a unique style.”

Lannigan said he was proud of Oliver’s final project, which took the form of a podcast and covered human will, the divide between materialism and idealism, and the different forms truth can take. “They synthesized everything very well,” he said.

It can be tough to get into Vonnegut, Lannigan said, partly because of his choppy prose, controversial themes, and apparent pessimism. But Lannigan sees optimism there, too.

“You take from his books a view of the unfortunate reality of things, but also clear, distinct solutions, and a hope that they can improve the world,” Lannigan said. “My recommendation is just to read him, and see what you get.”

Lannigan also recommends having help along the way. When giving him feedback on the course, many students said they made good friends, and that the rich discussions offered a fun and enlightening path through even the most confusing of Kurt’s works.

“We dealt with things that seemed inconsistent or absurd by talking through how different people interpreted them. Sometimes we didn’t reach consensus, but it always helped to sit down in a group and try to make sense of it together,” Lannigan said. “Even if all else fails, and we can’t create a communitarian society as Kurt envisions, we at least built this small community here.”

How Film and Media Studies Grew at Tufts

The Joy of Ex