A New Tool for Equine Health

Melissa Mazan, V93, needed a way to test lung function in horses that couldn’t come to Cummings School of Veterinary Medicine. So she invented one with the help of three School of Engineering alumni

When it comes to medical procedures, horses are like young children, says Melissa Mazan, V93, a professor of large animal medicine at Cummings School of Veterinary Medicine. Horses won’t necessarily comply with requests to stay still or hold their breath—making it incredibly difficult to test their lung function, which is essential to the success of equine athletes.

“Equine asthma is an important cause of poor performance for high-performance horses, second only to lameness, and a quality-of-life problem for older horses with chronic disease who can become essentially respiratory cripples. Horses with advanced disease aren’t hard to diagnose on the farm, but in young athletic horses, it can be almost impossible to detect,” says Mazan.

It is often a silent condition, other than slower running time, as these horses are very fit. But, she adds, they win or lose races by hundredths of a second, so it “takes only a small insult to the respiratory system to bring a horse from first place to the back of the pack."

The Hospital for Large Animals is one of the only centers in the United States that performs lung function testing on clinical equine cases, but clients have to travel to Grafton because the testing systems are elaborate. This poses a problem that has plagued Mazan for decades: How can the hospital diagnose lung function in horses they can’t bring into the clinic?

“What we're looking for is whether the horse’s airway is presenting more resistance than normal to the flow of air,” says Mazan. “If resistance is high, then the work of breathing has to increase, which is work a horse can't put into galloping or jumping.”

In human medicine, lung function can be measured using portable tests known as peak flow meters, which measure how much air is coming into and going out of the lungs. They require the person being tested to take a large breath in and exhale forcefully until their lungs are empty. But with children, lung function testing is often done using a method that doesn’t demand that they follow such instructions.

It’s called the interrupt system, and the idea is that the child wears a mask or mouthpiece with a sensor to measure the air in and out, and as they breathe regularly, a very rapid shutter cuts off breathing for a fraction of a second. It’s so fast that kids don't even notice.

“The idea is that if you cut off breathing for a really short time, the pressure within your lungs equilibrates with the pressure inside that mask,” says Mazan. “To get resistance, you have to be able to measure air flow and pressure. The interrupt method allows you to do both.”

She felt that something similar could work with horses, and an idea for a portable device to test equine lung function began to form. 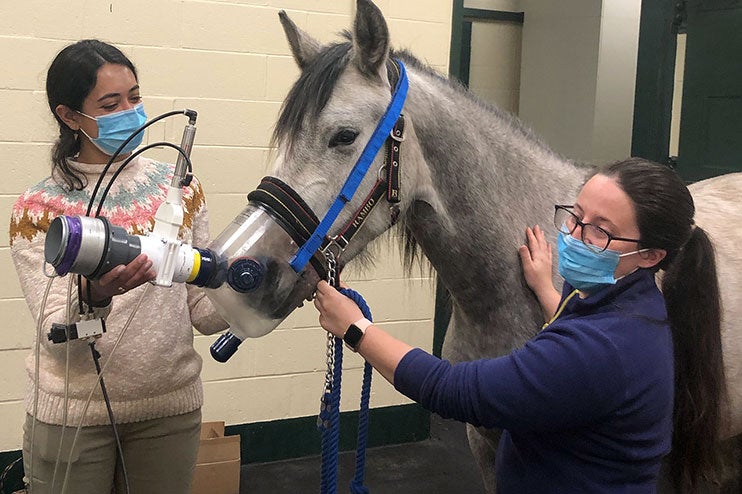 In 2018, Mazan brought her idea to Kristen Wendell, associate professor of mechanical engineering at the School of Engineering, who was looking for projects that her fourth-year students could complete for their capstone design assignment. She tries to find clients who have mechanical design needs but not necessarily the resources, knowledge, or time to do them on their own, and her students work on the project as a service of sorts to the clients.

“When Dr. Mazan told me about her idea, I was so excited about the alignment with the kinds of problems I wanted my students to tackle,” recalls Wendell. “It was a very multifaceted design problem in terms of the required mechanical engineering concepts, such as fluid flow, machine design, weight and geometry, electronic sensors, and computer programming.”

Wendell’s students had the opportunity to choose between a handful of possible projects, but the allure of the problem’s complexity and working with live horses was very strong. Several students accepted Mazan’s challenge, including Thomas Coons, Christopher Simotas, and Brian Barrows, all E19. The original goal was not to create the entire device; rather to first develop parts that satisfied the needs Mazan outlined.

The team divided into two smaller groups—one focused on figuring out the air flow measurement and the other focused on pressure. Coons and Simotas were on the air flow team, and they ran into two main obstacles. The first was that volumetric flow sensors can be very costly. The second issue was that measuring volumetric air flow, or how much air is passing, with less expensive air speed sensors is very difficult. Barrows was on the pressure team, where the main focus was getting the shutter system, which caused the interruption in breathing, to work smoothly and enable an accurate pressure differential reading.

“Our task was to make a system that could interrupt breathing for only 300 milliseconds,” explains Barrows, who now works for iRobot. “Getting a large valve to move that fast was challenging enough, but we also needed it to be quiet to avoid spooking the horse.”

Though the team reportedly spun their wheels quite a bit on those issues, they ended up finding creative solutions in surprising places. For example, the team was looking for a large pneumatic valve, and multiple engineering companies told Mazan that what she wanted didn’t exist. However, she ended up finding key parts through a recreational vehicle retailer, which uses large pneumatic valves in RV toilet systems, and from a Halloween supply store, since Halloween decorations often use pneumatics to achieve their spooky effects.

“What makes design work difficult is that you aren’t solving a problem with a clear answer. You need to understand what the client is trying to achieve and what, from an engineering perspective, are the most important problems to solve to accomplish that,” says Coons.

The group presented their prototype to Wendell and Mazan regularly throughout the semester for demonstrations and feedback cycles, and Wendell says they all earned an A on their capstone project.

“At the end of the semester, Professor Wendell created a matrix on the board with each class project listed across against various engineering disciplines like materials, programming, and heat transfer. She then asked our class to reflect on which of the disciplines did our projects interface with. In a surprise to us, ours hit every single one of them,” says Simotas, who now works for Raytheon Technologies. “We felt very proud of how much we were able to accomplish and were impressed by all the tools we had acquired in our tool belt over our four years. It was a great and inspiring learning experience.”

Though they accomplished the challenge Mazan put forth, the device was far from complete. Coons, Simotas, and Barrows graduated in the spring of 2019, and Mazan was impressed with how far they took the design. She asked if they wanted to continue to collaborate on the device, and they all said yes, because they loved Mazan’s infectious energy and passion while working on this “fun side project.”

For the rest of the year, they constructed more of the device and visited the Grafton campus to meet with Mazan and test the prototype on equine patients. Horses breathe only through their noses, but a clear plastic mask goes over their nose and mouth to help the mask stay in place. “Horses are used to wearing things, like bits or halters, and they tolerate this very, very well,” says Mazan. “At the front of the mask is an opening where the flow meter and valve are located. The horses just breathe through it normally, the valve closes, and a pressure transducer on each side of the mask measures the difference between the pressure inside and outside the mask.”

Before the team tested the device on a horse, Mazan used herself as the guinea pig. She donned the mask and gave her husband power over the button that closes the valve to interrupt breathing, so she could not anticipate when it would happen. The interruption was so fast that she never noticed any impediment, she says. And after testing the device on live horses, which have much larger lungs and slower breathing than humans, the team found that they didn’t appear to notice the interruption at all.

Early in 2020, Mazan and the engineering alumni met with intellectual property attorneys to see if they might be able to patent their system. When the COVID-19 pandemic hit, the collaboration stopped for a while. Mazan tinkered with the system herself from home, responding to suggestions from the attorneys to shore-up the device and make it more patent ready.

For the engineers who worked with Mazan, the possibility that their name could be on a medical device patent so early in their engineering careers is astounding. “I've been on the Tufts faculty for six years, and in that time, this is the only patent application I have seen come out of mechanical engineering capstone,” says Wendell. “There were some prior to my arrival, but it’s very rare that this occurs.”

More recently, with the help of face masks, vaccines, and rapid tests, the group work has resumed, though the team is slightly smaller since Coons is now pursuing a Ph.D. in mechanical engineering at the University of Michigan. Mazan is deep into clinical testing. So far, the results are incredibly promising.

“When we compare it to our gold standard, which is called esophageal balloon pneumatic method, the fidelity is very high. We get the same measurements for resistance with both methods,” says Mazan. “You might ask, ‘if that’s the gold standard, why don't you do that all the time?’ Because it's a giant pain in the neck. You have to literally pass a balloon up their nose and they have to swallow it down into the esophagus. Horses that aren’t used to this process will object.”

Mazan intends to circle back with the legal team to complete the patent on the device and hopefully find a company that would like to sell it. “I always tell the engineers that nobody's going to get rich off of this one,” she laughs. “It's just fun, and I hope it will be useful.”

Worried about Your Horse’s Nutrition?

Why Are Horses So Fast?